When we began the investigation into Rebecca A. Rodriguez of Cook Vegan for Me (aka One Animal World (aka Animal House TV aka Lucky Head Films aka Animal Time aka Animal Time TV aka Pacific Animal Society aka Barks of Hope aka Animal Centric’s) fraudulent GoFundMe campaign for the starving sun bears, we had no idea the repugnant can of worms we were opening or how long the exploitation of animals for money had been going on!

People couldn’t figure out why the whistle blowers scrutinizing her alleged missions would come under such brutal and severe, relentless attacks and become victim to the most heinous cyber stalking, harassment, intimidation, hacking and victimization we’ve ever witnessed.

The whistle blowers had no inkling what lay rotting and fetid in Pandora’s box!

October 2014 : Rebecca Rodriguez raised $100,000 in donations / “investments” for her project to FILM the rebuilding of Adams County Pet Rescue in Othello Washington which had burnt down.  Even Mayor Logan apparently invested $60,000 of his own money into her project? At the time Rodriguez told the press, the management of Adams County Pet Rescue plus the volunteers that she was operating a not-for-profit organization called “Animal House”. Thus they all donated believing their contributions were safe and legally accounted for.  This was an outright dishonest and fraudulent lie.

The Animal House charity was only registered 3 years later in October 2017!

Furthermore in an attempt to secure a $25,000 grant in addition to the $100,000 in donations, the shelter management/board was forced from a previously diametrically opposed decision not to perform pediatric spay/neuters due to the high risk of complications and fatalities.  Rodriguez insisted and kowtowed board members into submission and forced them to agree to implement a 100% compliance to these high-risk procedures without which the grant would not be given to her.  Thus clearly Rodriguez’s focus was on money and she didn’t care that she was putting animals’ lives at risk just so she could make a buck!

And this from a supposed “animal advocate” “fighting for animals”!

What happened to the $100,000 in donations and the $25,000 grant money? Where is the fiscal accountability and the professional assessment on how all this money was utilized?

2017 : Suspicions were raised about Rodriguez’s alleged mission to assist the sun bears of Bandung Zoo whom she claimed were starving and eating their own feces to survive for the following reasons :

1) Rodriguez had clear evidence from multiple experts who weighed in on the sun bears of Bandung Zoo and independently clarified that the sun bears were not starving and had in fact never been starving so why was she, with this knowledge, creating a fundraiser for them?

2) Both Rebecca Rodriguez and her accomplices Alycia Barlow and Poo Holmes knew prior to creating the GoFundMe and petition they were emphatically told NOT to start a fundraiser without clear approval to do so.  They had no such approval.

3) Rodriguez had NO CONTACT with Bandung Zoo who also had no idea she was fundraising for their sun bears!

4) Rodriguez, an unknown American with zero qualifications or credentials, arrived at Bandung Zoo with a list of demands including a demand to examine the sun bears. They had absolutely no idea who she even was.

5) Rodriguez knew months in advance prior to leaving for Indonesia that since May 2016, PKBSI (Indonesian Zoos and Aquariums regulating animals) had been working to improve and upgrade Bandung Zoo.  She was also repeatedly informed that Cee4Life an Australian-based non profit had also been assisting Bandung Zoo since March 2017. Therefore her purported “mission” to “help the starving sun bears of Bandung Zoo” was completely bogus and fraudulent) as the animals and the zoo itself was undergoing massive upgrades and improvements long before Rodriguez and her “expert team” arrived to “render assistance”!

6) Rebecca Rodriguez, via GoFundMe, specifically identified the starving sun bears of Bandung Zoo as the beneficiaries of her campaign. GoFundMe clearly states that a policy violation occurs when funds are not delivered to the identified beneficiaries AND that the fundraiser may not be misleading! Rodriguez’s fundraiser was highly misleading and lie-ridden and she repeatedly changed the beneficiaries almost weekly and included a host of animals all apparently in dire need of help. Subsequently it was confirmed that even though Rodriguez could not change the beneficiaries, nonetheless, NONE of them received even a $1 from her campaign wherein she netted herself $65,000 tax free!

7) Furthermore Rodriguez has outright refused to give an independent legal tally / accounting of donations and side-stepped the issue of where all this money has disappeared to!

8) Rodriguez’s accomplice Poo Holmes created a petition addressed to the President of Indonesia to shut down Bandung Zoo. Interestingly, despite the petition driving the GoFundMe, both Poo Holmes and Rebecca Rodriguez are calling for the worldwide “shut down” of all zoos but the fundraiser is allegedly to help the animals of Bandung Zoo all the while Poo Holmes petition is to shut down the zoo. Not a professional, cohesive or logical plan is it? Help the animals at the zoo or shut down the zoo? Which is it?

Also interestingly, despite Rodriguez and Holmes’ “professional opinion” that all Zoos must be closed world-wide,  Rodriguez’s own “expert team member” Dan Allen who accompanied her to Bandung Zoo, is also not opposed to zoos! Confounding isn’t it?

September 2017 : Subsequently Rodriguez started yet another GoFundMe fundraiser for Mikey an orangutan in Sumatra at Kandi Zoo.  Interestingly, Rodriguez had ALREADY utilized his story and images in the original sun bears’ campaign so why this new fundraiser with herself again as the beneficiary.  Her goal? To raise $7,000. It was subsequently established that Mikey needed just $3500 to build a new enclosure so why was she fund raising for $7,000?  Furthermore, months later,  Scorpion Wildlife Trade Monitoring Group, an Indonesia-based animal protection group, ousted Rebecca Rodriguez for only officially pledging a mere $375 to Mikey! What was the $7000 fundraiser for then?

We believe the additional funds were needed for film production costs ie Rodriguez and her best friend Alycia Barlow were going to fly to Sumatra and FILM the construction of his new enclosure, much like they had done with Adams County Pet Rescue, for the direct financial benefit of Rodriguez and Barlow who were undoubtedly hoping to sell the series to a major television network.

2018 : We stumble upon another GoFundMe fundraiser operated and organized by none other than, surprise surprise, Rebecca Rodriguez! This time its for the pets left behind after Hurricane Maria in Puerto Rico! Goal : $20,000!

Confusingly, Rodriguez requests that payments be paid directly to her via RebRod LLC and that she will “forward the money” on to Barks of Hope via PayPal or wire transfer.

Why aren’t ALL payments/donations paid directly to Barks of Hope? Why must they go “via” Rodriguez who is not even a legally registered affiliate for Barks of Hope with IRS? Furthermore, how does Barks of Hope track the donations paid to Rodriguez when they do not have access to her bank account? We also believe the “disaster status” of the Hurricane Maria fundraiser is enabling Rodriguez and possibly Barks of Hope to illegally and unjustly enrich themselves by circumnavigating the IRS rules.

Thus we have some very interesting evidence that Rebecca Rodriguez has for many years, lied and deceived the people she duped into donating for various “animal-related” missions totalling around $250,000 tax free! She has exploited wonderful, kind-hearted people and desperate animals all in her relentless pursuit of money and fame!

Interestingly, with the expose of Rebecca Rodriguez’s fraudulent and dishonest modus operandi spanning at least 25 years it has been discovered that the GoFundMe fundraiser organized by Rodriguez for Barks of Hope has mysteriously and suddenly been shut down at the $6,000 mark.

August 2018 : Yet another GoFundMe has been created, this time hosted by Rodriguez’s partner in crime Tracey Kleber. They have a fundraiser with a $10000 goal claiming the 150 dogs of Fasano need expensive veterinary care and “paperwork” to relocate the dogs.

We have confirmed with the President of the shelter, Quattrozampe Nel Cuore – Fasano – that they have NO INVOLVEMENT with Rodriguez or Kleber, and not only is Rodriguez’s :

fundraiser in direct competition with the legitimate Quattrozampe Nel Cuore – Fasano fundraiser for €5000 running on Facebook :

Rodriguez is thus again diverting funds from the legitimate fundraiser.

Furthermore, Quattrozampe Nel Cuore – Fasano do not and did not sanction/condone Rodriguez’s fundraiser (exactly the same thing happened with Bandung Zoo and the supposed “starving sun bears” where Bandung Zoo knew nothing of Rodriguez OR her fundraiser) and they are seeking legal remedy against Rodriguez and Kleber of One Animal World, because they are committing fraud yet again, per GoFundMe’s regulations : 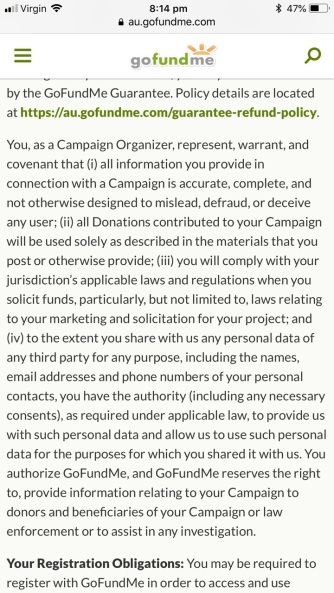 Then there’s the plea for donations for already completed missions like “building a reading hut in Sumatra” – completed in August 2017 – plus interspersed with 150 dogs of Fasano Italy mission, amongst other dishonest stories and pleas via Rodriguez’s website : www.oneanimalworld.com!

All of this quagmire of absolute total b.s. exploiting animals for money and profit, outright blatant lies told to the public all in a quest for fame and money needs to come to an end.

We hope the good people of Othello, Vancouver, Seattle, Washington and Oregon plus the innocent Indonesian people and Bandung Zoo management together with Cee4Life and of course the IRS, FBI and local law enforcement and the relevant Attorney Generals have a forgiving heart, although we sincerely doubt it!

So many fraudulent and dishonest fundraisers, so many exploited animals, so much illegally undeclared income “raised for animals” so many state and federal laws broken and we haven’t even begun to unravel the duplicitous and diabolical behavior of a professional con aided by her knowing accomplices and co-conspirators for that is what they are.

We leave it in the hands of law enforcement now.

For the full article on the “150 dogs of Fasano” read here :

For the full article on the “Adams County Pet Rescue mission” read here :

One thought on “Rebecca A. Rodriguez #QueenOfDeceit – of Cook Vegan For Me aka One Animal World aka Animal Time TV 10 year long exploitation of animals revealed!”