However, this is the timeline of her duplicitous fundraising and highly questionable, dishonest actions specifically with regards to Mikey (Mikail) an Orangutan at Kandi Zoo in Sawahlunto (Sumatra).

Scorpion Wildlife Trade Monitoring Group, an Indonesia-based organization who specializes in identifying and capturing illegal wildlife traffickers made an announcement in May 2016 that Mikey – then a juvenile Orangutan who had been orphaned by the death of his mother – was in dire need of a new enclosure.

Scorpion Monitor who were at the time working in collaboration with Rebecca Rodriguez passed on this information to Rodriguez in and around February 2017 as she had a gigantic fundraiser on the go.  Initially the fundraiser was for the “starving Sun Bears of Bandung Zoo” but due to several factors, morphed over time as being for “the animals of Indonesia”! (All in violation of GoFundMe’s terms but we have discussed this already). 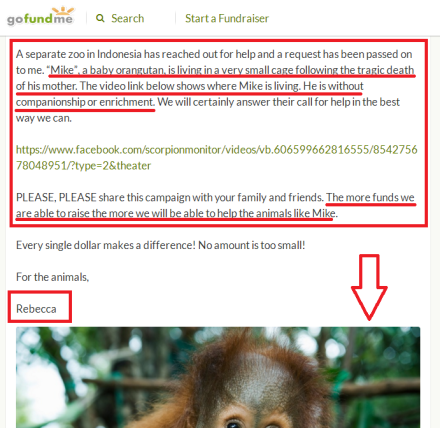 Suddenly, in Rodriguez’s GoFundMe fundraiser we were introduced to “Mikey” a then juvenile, orphaned Orangutan at Kandi Zoo.  This occurred in April 2017.  At that time, Rodriguez’s fundraiser had already accumulated $45 000 USD in donations!

At this juncture it is interesting to note that Rodriguez, although already in possession of a massive amount in donations, had included Mikey’s imagery within the original fundraiser – to raise ADDITIONAL donations.  This beggars the question that if Rodriguez had accumulated $45 000 at that time this meant she was in an immediate position to turn over funds for the construction of Mikey’s enclosure which only costs around $3500 why did she instead choose to do nothing!??

So why was she utilizing his images to raise MORE money when she had cash on hand?

The public generously donated believing Mikey would get a new enclosure thanks to Rodriguez and her “mission”! What kind of supposed self-proclaimed “animal advocate”, “fighting for animals” that she “cried over” doesn’t deliver immediate assistance (money) to a baby like this in absolute critical living circumstances when she has the funds on hand to help him?

Then suddenly Rodriguez created YET ANOTHER fundraiser, this time specifically “for Mikey” with a targeted goal of $7 000 USD.  This occurred on 29 September 2017 (now already months and months had passed and this poor baby was still living in a cage since early 2016!!!!) and was promoted via her own private Facebook page and was also tweeted by “team members”.  Interestingly, a new enclosure for Mikey would only cost around $3 500 so why was Rodriguez fundraising for $7 000?  We assume the additional funds would be spent on flying “team members” over to Sumatra and the costs associated with film production! 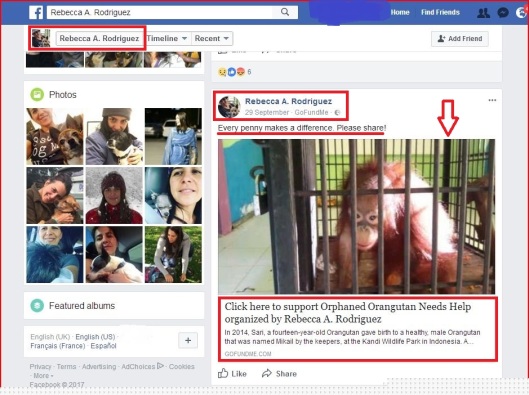 Also of interest is Rodriguez refers to Kandi Zoo as a Zoo committed to “kindness and compassion” therefore she is willing to help them.  However, Rodriguez and her “expert team” has constantly spoken out against ALL ZOOS and has brutally criticized Bandung Zoo in Indonesia for their alleged “animal abuse” and she and her teammates, want all Zoos all over the world boycotted and shut down because they say so and have formed a “watchdog group”!  Hypocricy at it’s finest!  Interestingly, Kandi Zoo was in the news for all the wrong reasons – animal abuse (Elephants, Tigers, Orangutans) : Kandi Zoo animal abuse / cruelty 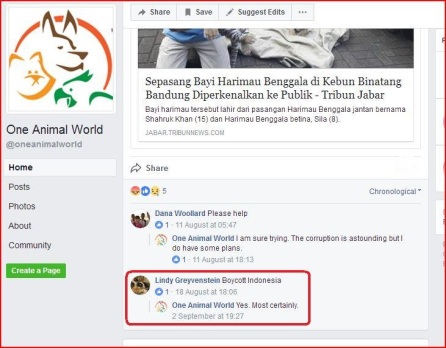 Months later when it was apparent to all involved or associated with Rebecca Rodriguez and her “expert team members” – Alycia Barlow, Dan Allen, Miguel Abi-Hassan, Marison Guciano and Poo Holmes, Rodriguez had no intention of helping any animals without there being some kind of direct financial benefit.  That is, unless Rodriguez could FILM the construction of Mikey’s enclosure and turn it into either a documentary for sale to Nat Geo or Animal Planet etc., or a video for their own YouTube Channel – Animal Time TV – all the promised help to these alleged critical and desperate animals evaporated into thin air!

Then Scorpion Wildlife Trade Monitoring Group distanced themselves from their association with Rodriguez and stated that Rodriguez had only pledged $375 to Mikey!  How much was donated by the public for Mikey in the original GoFundMe and how much was donated for him in the subsequent GoFundMe?

If Rodriguez had $45 000 USD in her coffers when she learnt about Mikey who was in critical condition and locked up in a tiny, inappropriate cage, why didn’t she immediately send funds to Kandi Zoo for the construction of his new enclosure? (A : Because she needed time to put together a team to fly to Sumatra and turn the new enclosure construction into a film production for self-promotion, infamy and money!)

If Rodriguez had used Mikey’s imagery and content in the original GoFundMe, why did she start another GoFundMe for the same purpose? (A : Because she is a con-artist!)

How much was donated specifically for Mikey’s enclosure in the original GoFundMe? (A : Nobody knows because there has been zero accountability or transparency with how $65 000 was utilized/disappeared to!)

Why was Mikey’s GoFundMe target $7 000 USD when it only costs $3 500 to build a new enclosure? (A : Because flying team members to Sumatra for a film-making opportunity costs money!)

If Mikey’s GoFundMe was for $7 000 USD why did she only promise/pledge $375 to his enclosure?  What was the additional $6625 for?  (A : Misleading, dishonest and just more lies from Rodriguez who promised help to multiple “animals of Indonesia”, none of whom received $1 or even a papaya!)

The lowest of the low steal from needy animals and fleece the public into believing they are actually helping some animals somewhere in the world.  Lies, lies and more lies!  Disgusting! 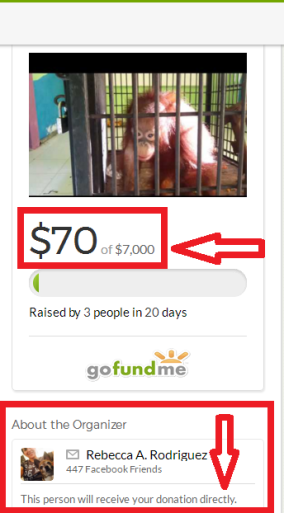